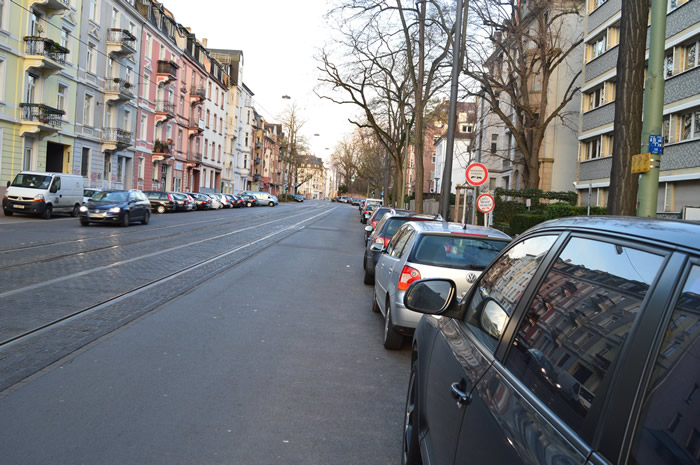 The lady at passport control at Frankfurt-am-Main seemed to have an issue with my travel documents. I Thought maybe because I had only two weeks left on my visa and the first leg of my ticket terminated in Berlin with only a 2 day suspicious stop in Frankfurt. Neither of the two of us understood what was going on in the mind of the other. She finally stamped me ok and got rid of me. It came to me that you must need a lot of coffee to still remain awake on your job at this time of the day.

According to my hotel room booking details, I might not be able to do check-in until 2pm. That was a long wait, so I wandered around the airport a bit, checking out the arrival hall, I found a tourist information desk and purchased a 2 day Frankfurt card, which promised unlimited free use of the transport service in the entire city , and also entitled you to half price rebate at some places of tourist interest. It cost me Euro 14.50. I had seen all that interested me in the airport lobby and finally sat down for while wondering what to do next.

Around 9 am, a taxi driver came and suggested to drive me into town. There was no reason why I should keep on hanging indefinitely at the airport lobby so I agreed to go with him. Better to do my waiting at the hotel lounge, I reasoned. He wanted Euro 28 , and since I had no idea what the going rate was , I said ok, even though I suspected I was being skinned but what could I do?

Frankfurt-am-Main airport is quite busy. In this chilly morning ,the sky all around was criss-crossed with the lingering contrails of jet aircrafts long departed. It was cold but not unbearably so. I had experienced worse in London. My destination was the Imperial Hotel am Palmengarten

The ride to town took about 15 minutes. At the hotel, the taxi billed me Euro 30 and I quietly paid up. No point kicking up any kind of fuss in a strange territory where you didn’t even speak the language. The lady at the front desk confirmed they had a room for me, but not yet because it was only yet about ten. I suggested to her to have my luggage put in store while I went out to get myself some breakfast.

Not many shops were yet open even at ten .The streets are quite empty too. Folks appeared to me pretty laid back in this neighborhood. There wasn’t a single black face anywhere in sight and at this hour i seemed a minor star on the road . I discovered several supermarts within walking distance as well as some Asian food shops and I was comforted that I was not likely to starve during my stay here. I found a discount supermarket not too far away and there bought myself a wool cap and muffler set for just Euro 7. Also bought some bags of mixed nuts and a couple of pears.
Returning to the hotel, the receptionist had surprisingly found me a room because she remembered that my daughter had called a few days earlier to request early check-in and she just forgot, When faced with critical travel plans always defer to your daughter if you are lucky to have one. Mine didn’t fancy endless sleepless nights worrying about how daddy is faring. A shout out to all good daughter.

Returning to the hotel, the receptionist had surprisingly found me a room because she remembered that my daughter had called a few days earlier to request early check-in and she just forgot, When faced with critical travel plans always defer to your daughter if you are lucky to have one. Mine didn’t fancy endless sleepless nights worrying about how daddy is faring. A shout out to all good daughter.

My hotel room is larger than my room at home and better furnished. The room had about a million places where you could plug every appliance you can imagine but not a single one of them to plug my iPad and to charge my power-hungry camera battery . The front desk finally found an adaptor that could accept my BB plug , meaning that I could at least remain in contact with the outside world and take crappy photos with my Blackberry phone. I was really tired though and my eyes gritty, so I took a hot shower , hit the bed and was asleep for six hours.

A tramway ran right in from of my hotel. It is a very quiet business neighborhood and even so the trams don’t upset the balance so much. My hotel room, even though facing the road, appeared soundproofed nevertheless and I wasn’t so much worried. I woke up with the need to get some food to eat and also to see what my new neighborhood looked like. . It is Saturday and most of the shops closed early. I went looking for an adaptor for my devices. Leipziger Strasse is just like your typical London High street (a lot cleaner though) and contains a forlorn looking Woolworth which couldn’t help with the adaptor I needed. I finally found luck with a small Asian- owned phone shop. The very talkative owner was quite pleased to sell me a suitable adaptor for 8 Euros . A small price to pay for negligence I suppose. Never leave home without the proper adaptor. Again the guy wanted to know where I was from – UK or USA. I think I now know the reason . It may not be usual to find an African , sightseeing in winter with a Nikon SLR hanging from around his neck.mThe camera gave me the desired respect and I found so people were pleased to help an American tourist out.

A 75cl bottle of water costs 2.50 at my hotel. I wouldn’t take this so I got two 150cl bottles from the local grocery store 300 yards away for less than Euro 2.