24 December – The pink pipes of Berlin 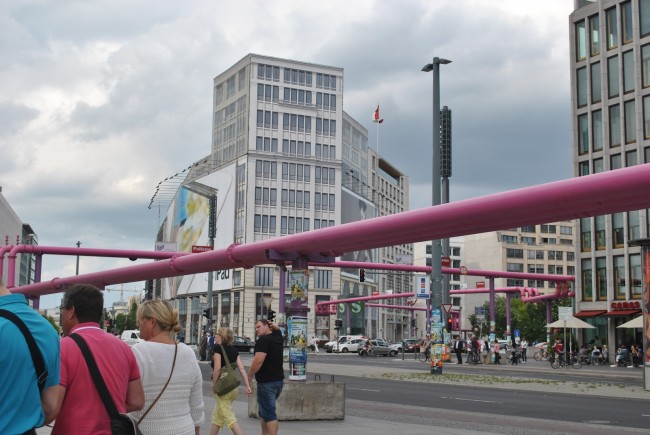 Two days of holidays loomed ahead. I went out early today with the knowledge this could be my last day for shopping before I returned home. I also needed to go uptown to find the Clarks shoe shop and buy myself replacement shoes.

Wilmersdorferstrasse was the nearest commercial hub to me and so I naturally made this my first stop for the day. On the way I accosted what looked like a piece of mod street furniture , a huge , elevated stretch of pink pipe running from WilmersdorferStrasse, across Lewishamstrasse and disappearing into the ground on Kurfürstendamm , just about 50 yards away from the Block House. It ran for a distance of nearly 400 yards. I would later find this strange erection at various locations around Berlin and so was naturally intrigued.

Here is the secret of the pink pipes: The word ‘berl’ actually just means swamp and from which was derived the name, Berlin. Since Berlin was founded on a very swampy region, the ground-water level is actually quite high and in the city center , very close to the surface. This means that whenever there is a new building being constructed in the city, the foundations would be underwater and the construction site should be constantly flooded . The water therefore needed to be constantly pumped away and this is where those pink pipes came in. If you followed a pipe you would always find that the pink pipe originated from a construction site like this one here on WilmersdorferStrasse. If you followed it to the other end you would always get to a canal or a closed drainage channel.

Shopping at Wilmersdorferstrase was no less as annoying as shopping back at home. You buy stuff from a small store at ‘marked down’ price. You got into a big store a few yards away to find the same item at a lower cost than the mark-down of the small store. And it dawns on you that the small store must have bought same goods from the big store , marked up the price and then stuck a ‘sale’ price tag on it for suckers like you. Never mind , I return home in a few days, I thought as I licked my wounds. I lingered nevertheless and for I think longer than necessary in the Wilmersdorfer Galleria area, buying bits and bobs that I really had no use for, just like any tourist would .After taking my purchases back to the hotel, I finally headed for Clarks

It was now after 1pm and a drizzling rain had begun. I persisted nevertheless, regretting that I had not taken along my woolly cap. . I took the U7 from Adenauerplatz to Bismarckstrasse and then the U2 toward Stu Pankow , but got off at Rosa-Luxemburg Platz. My destination was Neue Schaenhauser where the Clarks shop was located. I could initially only find Alte Schoenschoser though. I was finally rightly directed to my destination which was about 20 yards away.

Braving a heavy drizzle of rain, I was disappointed to find the Clarks shop closed . They took their Christmas break too early, I guessed. I headed dejectedly back to base. More disaster loomed. and I found most shops were also now closed . Since I had neglected to purchase enough provision for the next day which was Christmas, the ugly situation of going hungry on Christmas Day seemed certain.

Luckily my neighborhood Thai takeaway was still open and I bought two helpings for safety. The second I thought to store in my hotel room fridge just in case . A cold dinner would definitely be better than no dinner at all. I watched a German film on television. Somehow I could follow the story even though I didn’t understand much of the dialogue. Many yeses back, I attempted to watch a German film I borrowed from the Goethe Institut in Lagos and the experience was rather alienating. Even the subtitles offered no succor . But here was I watching a German language film in Germany and understanding the film. Psychologists must have something to say about this and especially on how the method could be used to improve learning and confidence. Oops! It is already known as learning by immersion.

From what I had seen so far, I was beginning to like Berlin a lot more than Frankfurt.