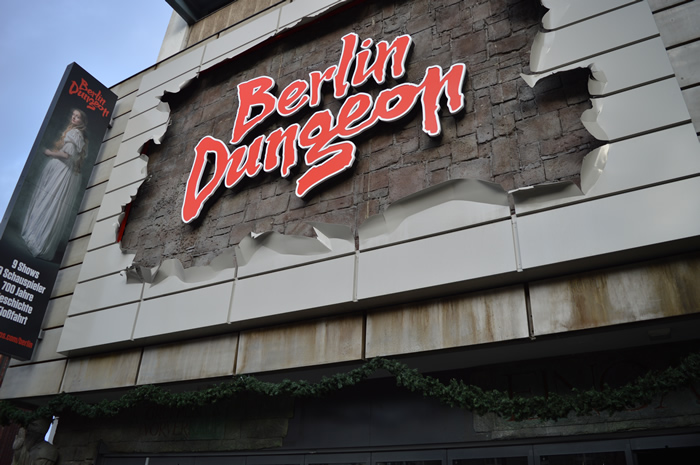 For unto us a child is born, unto us a son is given: and the government shall be upon his shoulder: and his name shall be called Wonderful, Counsellor, The mighty God, The everlasting Father, The Prince of Peace. MERRY CHRISTMAS TO ALL MY FRIENDS. May the peace of God remain with you. Amen.

Christmas day. As I expected, the shops were shut. The transportation system all worked nevertheless. I purposed to visit the Berlin Dungeons this day.

No sooner had I stepped out of the hotel that the drizzle again started. But I was also determined and made it to Adenauerplatz underground station without getting soaked. I took the train to Pankow and alighted at Alexanderplatz. This certainly was not a great morning for walking . If you’d ever felt cold winter rain on your face you will understand what I mean.Alexanderplatz was lively as ever nevertheless.

I set about looking for the Berlin Dungeon. . It took some time for me to locate the place but I was emboldened by the discovery that there were many tourists like me about. . I passed through a fun fair and took some videos of skating kids and had my first roasted chestnuts in several years. I walked around lost for more than 15mins which is a small price to pay for not learning the language beforehand and consequently everybody shook their head when you asked for direction.

A Jehovah’s Witness lady eventually directed me right and I accepted her magazine as a gesture of gratitude. A mystery I found here was that tourists attractions were never so easy to locate. It was as if they actually didn’t want them to be found at all. I found this one tucked inside a commercial block and the only sign was a six foot wide plaque placed on top of the entrance. Not good enough at all, don’t you think? In my country you’d have four twelve foot tall speakers located at the door blasting away like crazy and also at least six acrobats prancing and somersaulting away as they handed out leaflets to passers-by. Wallahi these Germans don’t know how to ‘sell market’ at all. I mused.

At the Berlin Dungeon I paid about €13 instead of €20 on account of my Berlin Card.and joined the English narration group. I found the show a little bit tacky but fun nevertheless. It all lasted about 45 minutes after which I took the train back toward the hotel but on an impulse decided along the way to visit the Olympic Stadium.

Minutes later, I was scared to find myself stuck on the train in a dark tunnel at the end of the line after Bismackstrasse ., How was one supposed to know this would happen? But here was I a sitting duck for the laziest train mugger, or a specimen for Hans the Ripper to practice his surgery with. The train finally proceeded the other way after a long stop , I got off at the Bismackstrasse exchange and caught another back to Adenauerplatz . I slept tired and like a log.