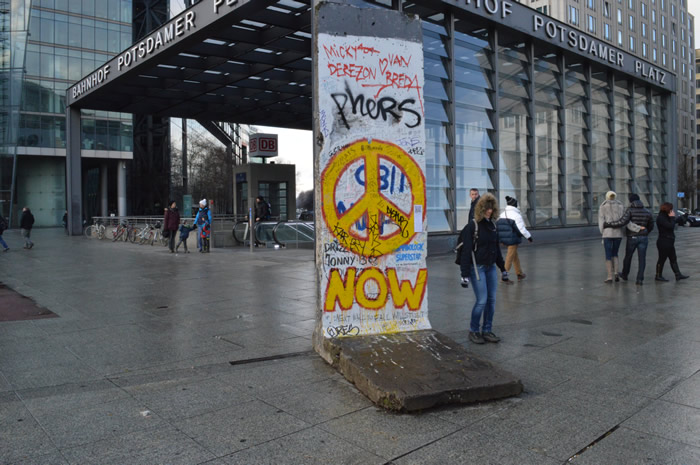 Visiting Madam Tusauds today and maybe a couple more tourist destinations to cap my journey.. Again, no sooner had I stepped out that it started to snow. It began first as a little wet drizzle but eventually got worse, I hotfooted to the underground station determined to get to my destination . I took the U2 to Potsdamer Platz. There I wondered how to get to the Brandenbburger Tor station where Madame Tussauds was located. However and from experience and seeing that Brandenburger Tor was just a stop after Potsdamer Platz, I thought it shouldn’t be so far to walk. I was right. My destination was about 400 yards from Potsdamer Platz.

The German Parliament , the Reichstag, was along the way to Madame Tussaud’s and so was Holocaust Memorial also known as Tiergarten Park as well as Checkpoint Charlie represented by a little that was left of the famous Berlin Wall. The vicinity was swarming with tourists. Madame Tussaud’s is not too far from the Reichstag, the parliament and it was here that I saw the first uniformed policemen (outside the airport) since I came to Germany . They didn’t look at all menacing too ; very helpful they were. All they carried as weapons were one pistol apiece. Wake up world, you don’t need to have hostile police roaming all over the place with scary guns, to maintain law and order. Not even once was I even asked to produce my ticket on the underground. Everyone just assumed everyone else a rational human being and not an animal to be endlessly harassed . This is how a good country functions. My general advice to tourists, if you had only one place to visit in Germany you will be wise to chose Berlin over Frankfurt . Trust my advice

I gained admittance into Madame Tussauds for about € 7 due to my Berlin Card .Many of the waxworks were quite tacky. Obama for example is one foot taller than me and his head nearly twice mine. Some were really good though and in the same way as similar exhibits in London you quite expect them to start walking.

My visit concluded, I took some photos at the Tiergarten Park and around the German Parliament, ate two bratwursts for the first time while watching kids and their parents play on the snow slides. Done with Madame Tussauds , I headed finally for the Olympics Stadium determined to actualize my failed visit if the previous day. . I found it a horrible gray gargantuan concrete edifice which looked like a massive colosseum and I concluded my visit in a hurry.

Much of the day was over for me . I was cold and couldn’t just wait to return home next day. I thought to do my checking today in the hope of going to the airport by bus next moring, but gave up on the idea. The winter cold was finally getting to me.