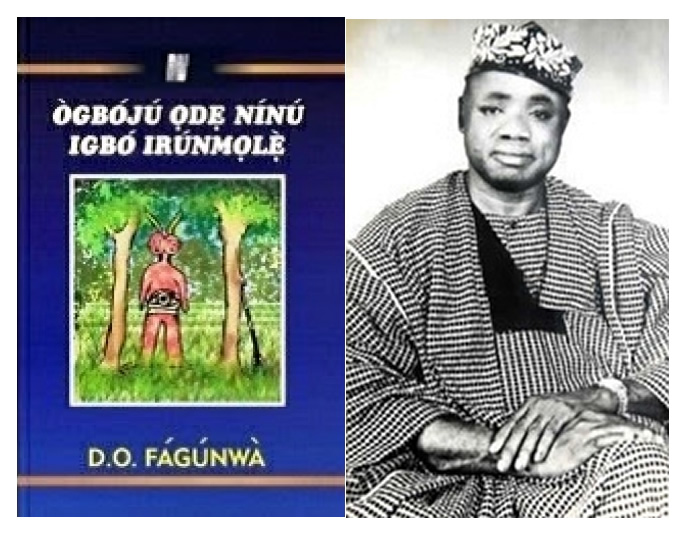 Ogboju Ode Ninu Igbo Irunmole by D.O Fagunwa, is widely considered the first novel written in the Yoruba language and one of the first to be written in any African language. It was first published in 1938. Wole Soyinka translated the book into English in 1968 with the title The Forest of A Thousand Demons. This delightful book was my first contact with the writings of African authors. It is perhaps also the first fantasy tale to be published in any African language. The original Yoruba version made enjoyable reading in my primary school years and indeed was the source of many fantastic nightmares. The Wole Soyinka version I have never read mainly because I consider translations inferior to the original. The title I also found misleading but I will put that to the desire of the publisher to use a title that has more marketability. Certainly the word Irunmole is not about demons, Irunmole are divine harbingers of enlightenment. But I don’t think an alternative title would sell many copies.

The style of the writings of Fagunwa is unique; technically most of his five books are not novels. When broken down the reader should find that each book is made up of several unrelated short stories all held together by one single tale involving a central character , a group of people or a place. Fagunwa collected stories from the folktales of the Yoruba as well as from around the world in the construction of his books. The result is what is known as composite novel or short story cycle. At the time Fagunwa wrote his first book this form had no precedence in African writing, but it was not a new phenomenon. It has its origins in works such as Giovanni Boccaccio’s The Decameron, which was written in the 14th century, and Apuleius’ The Golden Ass from the second century. Many writers including Fagunwa have since taken up the form and, it has developed over time. Needless to say, employing this form in African writing marked Fagunwa out as a great innovator.

Ajala the Terrible Child and Other Stories is my first published collection for children. It contains four stories, all of them inspired by stories I first read in Yoruba from the books of Fagunwa – Ogboju Ode Ninu Igbo Irunmole. The title story, Ajala the Terrible Child has a peculiar history. This particular story derived from a folktale titled Quarcoo Bah-boni, previously compiled by W.H Barker, a former school principal in Accra Ghana and published in 1917. In Fagunwa’s book the story was translated to Yoruba and Quarcoo the toddler menace became to be known as Ajantala, the character from which my version borrowed the name.

Ajala is an actual name which I chose for the complete rewriting of the original story. Why did I change the title in my version? Ajantala is definitely not a child-friendly name and as I would later find, it is not a name which exists anywhere else outside Ifa religion. When I was a child and reading this story for the first time, we had no problem with strange names, Ajantala merely sounded funny and eventually became the nickname we reserved for an exceptionally difficult child. But in these contemporary times, very few children including most of the parents would be able to make any sense of the name, Ajantala. We belong to different generations, the average age of the parents of the children for which the book was written would be about thirty five. I was nearly fifty when this book, Ajala the Terrible Child and Other Stories was first published.

Ajala the Terrible Child is about a mysterious boy who could walk, talk and do all other things a grown up could do, immediately after he was born. He also had so malevolent a character that everyone in the town was afraid of him. So his exasperated mother one day took him on a trip through the forest and there abandoned him. Ajala was adopted by a group of four animals living together and who to their regret reaped grievous consequences.

Usman and the Leopard is a moral tale which dwelled on the importance of keeping a promise. A travelling man finds a leopard hopelessly trapped in a cage. The leopard pleads to be set free and with a promise not to thereafter do the traveller any harm. But no sooner had the leopard been set free from the trap that he makes to devour its rescuer. The man’s life is eventually saved by a fox who tricks the leopard back into the cage and back into captivity where it is eventually taken away to be killed.

The Lion’s Food seems peculiarly an Aesopian type of story which somehow found its way into Yoruba folklore or as far as I know, into the tales of Fagunwa. It is about an old lion, too old to hunt anymore for food. And so he recommends that all the other animals come to him every day, one after the other to be eaten. His reason is that if as every one of the animals knows their day to be eaten this would save them any worry about being suddenly killed by a hunting lion. Again the fox, the wily one thinks up an alternative plan which ends the tyranny of the old lion and its accomplices. This story I later sold to a Canadian publisher as The Lions Dinner.

The Foolish Rich Man seeks to teach children the importance of being humble. It is about a wealthy man, worshipped by the entire town like a king. In his lack of immodesty he begins to think himself equal to God and so to teach him a lesson God turns him destitute and desperate. He is thrown out of his own mansion and thoroughly despised by his family and the entire town. For many months he suffers rejection and poverty until after learning his lesson and repenting of his foolishness, God again mercifully restores him to his previous position.

I remain curious about the origin of the stories which place the wily fox as an intelligent intercessor, this role being traditionally reserved for the tortoise in typical Yoruba folklore. Also, the fox is not so common in West Africa nor in the folklore of the region and any related beast is regularly regarded more as food than for unusual wisdom.

Read Ajala the Terrible Child and Other Stories