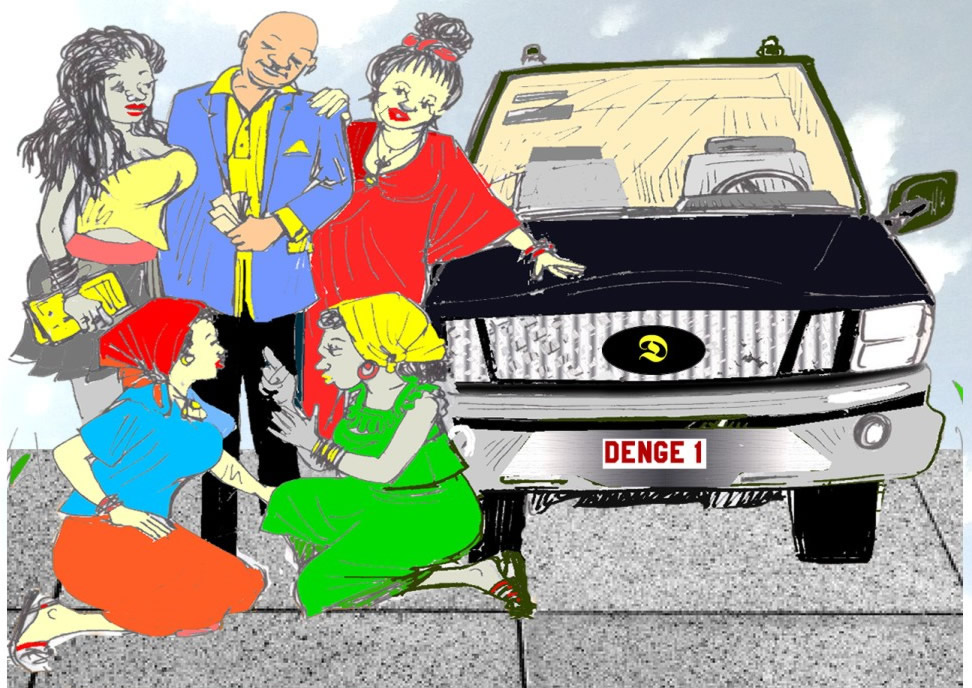 Denrele woke up smiling, passionately hugging and kissing his pillow. He could hear loud knocks, but they did not sound like they were from the coconut. These knocks were much louder. Someone was knocking at the door of his room. Actually it sounded like someone was trying to break in. Even before he could get up to open the door, it came crashing down, and in came his landlord, Baba Lati together with four men who looked every bit the hoodlums they were. Two of those men lifted Denrele’s bed with him still lying on it, took the bed out of the room and placed it on the middle of the road outside. His few belonging soon followed.
Thoroughly confused and half-asleep, he wondered what had again gone wrong. Only a few minutes ago, he had been the richest man in town and holding his bride-to-be close to him on a beach. What sort of evil had again succeeded in reversing his luck this time? Was it because he hadn’t given enough to the poor? Was it because God had become angry with him somewhere along the way?
Baba Lati came to him laughing but with evil in his countenance. In his hand was the half empty bottle of whisky which Denrele now quite recognised.
‘Denge, you don’t have money to pay my rent, and yet you have enough to buy alcohol. You will soon become a hopeless case, but I will not permit that tragedy to occur in my house. Goodbye, Mr, Denge; I reject bad luck like you from my house,’ Baba Lati taunted. Behind him, Denrele could hear the sound of hammers sealing off his room.

The timeline of Denge is about 35 years after Somber City. Nevertheless the social and economic challenges are even at this time similar and indeed worse. In 1980s and 1990s, the unemployed professional could flee the country to seek a living in nearly any inhabitable country of the world. The unemployed of the 2010s had nowhere to go, their numbers now in the tens of millions. Many tried to bury the hopelessness beneath narcotic drug habits, some ventured into big time crime and many more developed huge passion for occultism, football or some other mind-benumbing activities. A lot also sought to become rich and famous from gambling and this is where the story of Denge came from.

Denge is a first class university graduate who finds himself in an unemployment predicament. At the highest point of his depression he finds himself drawn into minor criminal activities and even contemplates suicide. Eventually, he has a dream of becoming rich by playing the lotteries and thereafter discovers that he has a talent for picking lucky lottery numbers. His new gift makes him very wealthy and Denge’s praises are sung all over the world.

The lottery companies are not amused, as several of them have gone broke and closed down because of the extraordinary luck of the lottery wizard called Denge. To their further frustration, several attempts to assassinate Denrele fail and thus they agree to a truce. After Denrele breaks a peace agreement with them never to play the lotteries anymore, the cabal unleashes all available machines of war, but Denge is miraculously rescued by his once-jilted fiancé. Many good dreams never last for long though and Denge wakes up to the fact that it has all been just a dream and he still remains as poor, jobless and hopeless as ever.

Denge is zeitgeist of the educated youth of this period, living in constant bitterness, due to societal neglect and their often futile escape into the dark world of intelligent criminals and desperate hustlers. How does the story usually end? Denge is finally evicted from his little rented room and walks away into a grim and undefined future. But will society get away so lightly?