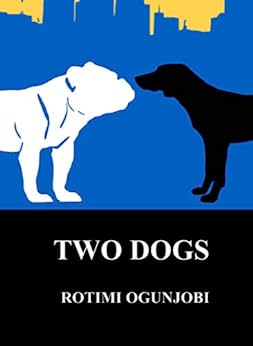 A satire about two bickering dogs, which lived next door to one another. One belonged to a poor fellow and inherited his wretchedness; the other belonged to a relatively more prosperous master and had wealth reflecting in his character. The prosperous dog despises the poor dog and in every way reminds him of his superiority. By the handiwork of fate, both masters die the same day in an accident leaving the dogs with no other choice than to fend for themselves. The poor dog who has quite become used to fending for himself sees little change in whatever the future has ever promised while the rich dog looks to the future with trepidation.
This tale presents a snapshot of typical contemporary human interactions.

What is this thing called pedigree, is it another type of degree ? – Lucky the mongrel dog. (Two Dogs – a novel)